Island of Blood is the new Warhammer 8th boxed set

In last issue of GW mailing list it was confirmed that the new boxed set for Warhammer will be named "Island of Blood" and that High Elves and Skaven (see the picture below) will be the armies chosen for the set. I don't think that the picture actually shows any of the new miniatures... maybe the statue will be the new terrain in the box?

update: I'm adding also some rumors about the boxed set contents, there is an handful of people around quite confident that this will be the actual minis in the box... update: Is the statue an actual terrain element from Island of Blood boxed set? Last White Dwarf issue has several pictures of that statue.... 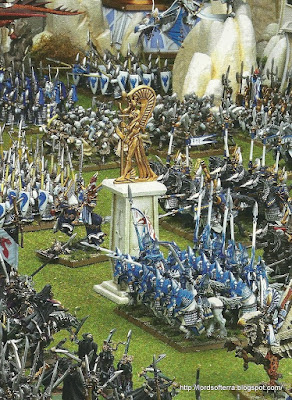