It takes some resin to build a city

I've been trying to built an urban themed gaming table for a while, I like the design of GW building (probably the most affordable) but I think that the gothic/tech/imperial style of some building is a little bit over the top... I just can't see why someone would put lots skulls and weird stuff on a house. A couple of months ago I found some interesting building manufatured by Manorhouse workshop that have just the looks I wanted for my city.

As you can see from their website they have a range of modern buildings that can be used for your warhammer 40k/warmachine games, every building looks pretty much the same (they are built from 5-6 different tiles) but I think they look just great.

This is a picture of a building I'm working on, on the side you can see an IG guard shown for scale. 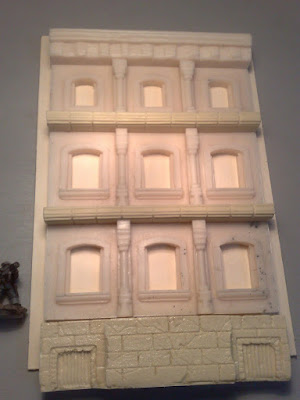