Someone doesn't like the new design of GW minotaurs and I had a lot of discussions with my friends about them, I think they are quite interesting and really original... they are meant to be some chaos monsters not some greek mythology creatures after all!

Anyway if you would like to put together a beastmen army but you don't like the design of GW minotaurs I wrote down a list with some really great looking alternatives:

- Axenarf by Hasslefree Miniatures: one head of the three available will make a minotaur

- Ilyad games Taurg: it's not available anymore on stores, you have to rely on eBay (picture came from CMON)... it was really great and I hope that someone will print new figures from the Ilyad Games line

- Confrontation minotaurs: they did some old models that were pretty cool and later they totally got it on the latest releases (they also did a minotaur lady!), unfortunately they are difficult to find... so again you should try on eBay

below some greens from Scibor 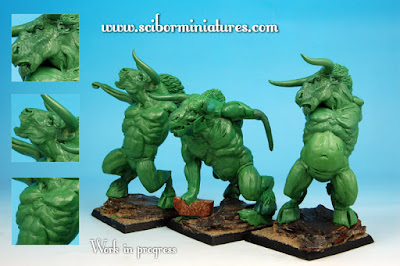